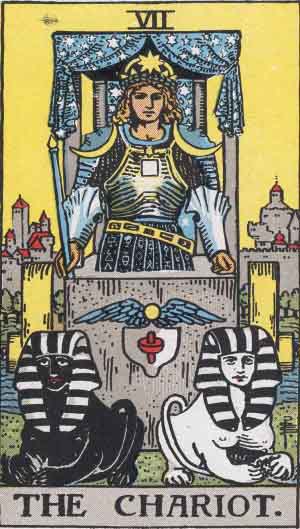 An armored figure confidently navigates ahead. The Chariot is pulled by a pair of sphinxes – seemingly moving in two different directions. Whether the chariot is stationary or moving, the willpower of the charioteer is enough to force it to press onward.

Above the Chariot is a blue drapery of stars representing divine guidance. The sphinxes below hint at a mysterious force helping to pilot the Chariot. His crown symbolizes his authority. His armor is ready for battle and protects him from vulnerabilities. This the seventh card of the tarot’s Major Arcana. The Chariot is about making the choice to move forward and expand. It’s a card of ambition and willpower.

This card represents triumph and overcoming obstacles. Set your sights on your goal and go for it! The Chariot is a call to move forward with confidence on your journey. If doubt has been plaguing you, this is an affirmation that you’re on the right track.  The decorated wardrobe of the Chariot suggests that you’ve already achieved much more than you give yourself credit for. Appreciate how far you’ve already come. You’ve achieved success before… and you will achieve it again.

The Chariot can also indicate that willpower is needed to overcome an obstacle. This is a good time to remember the why behind your goal. Use this as fuel to help push you ahead. The path won’t be an easy one, but you’re equipped to handle it. The Chariot carries with it an element of divine guidance. You might notice unusual opportunities or strange synchronicities appear on your path. Take it as a sign that you’re on the right track!

This card can also be a message that you need to expand your horizons. This could be in any area of your life: work, relationships, or personal development. Its appearance can indicate that there is something holding you back from action. You might find yourself needing to reduce time spent around negativity and drama. Work on surrounding yourself with positive influences and people who lift you up. As we often hear: “you are the average of the five people you spend the most time with”. Still, don’t burn any bridges on your path to toward your goals. The Chariot can bring with it aggressiveness (see the reversal section). Assess your goals and move past influences that are not allowing you to grow.

This energy of ambition, willpower, and expansion is a call to play big. Challenge yourself to push past your comfort zone into a new level of performance. Don’t settle for the easy path! There will be a time of struggling to see your vision realized, but don’t give up.

Make a list of attributes you want in a partner. Reverse engineer from your list to figure out where or how you can find them. Where would they hang out? What hobbies would they have? This can be a time where you are also working on your own confidence to attract the person you want.

Friendships and partnerships represented by the Chariot card are intense. It can represent someone like a gym buddy or coach. An individual who pushes you to strive for your best. It can suggest a dynamic of friendly competition.

Sometimes the Chariot can indicate you’re being seen as a “conquest” for another person. There’s nothing wrong with a little thrill of the chase. But if you’re looking for a long-term relationship, you don’t want someone who will soon be looking for their next prize.

Workplaces represented by the Chariot are intense and competitive. Expect long hours and high-expectations on work performance. This is a quintessential card of Wallstreet firms. Always growing and conquering.

This can be a great card if you’ve been thinking of expanding your business or career skills. It can sometimes be a warning of an impending merger that will shake up a company. For example, imagine a  small company that’s struggling to adept to new rules and regulations after a merger.

The Chariot is associated with careers and jobs related to expansion and strategy. It could represent jobs in transportation, logistics, and business consulting.  Anything that requires discipline, ambition, and training is a match for the Chariot’s energy. The latter could indicate military careers, professional athletes and their coaches.

Individuals represented by the Chariot card are intense, driven, and sometimes a little arrogant. If this is you: you’re ambition and hard-working nature is a gift, but reign it in if you find yourself dominating or berating others for not falling in line. Not everyone is on the same page as you. Not everyone has the same goals and values —and that’s okay! If you feel that aggressive energy rising up, chill.

Because of this card’s astrological association with Cancer, it could represent an individual born approximately June 22nd to July 23rd. Like a typical Cancerian, individuals represented by the Chariot might appear be hard on the outside but are very vulnerable and emotional underneath that all that armor. 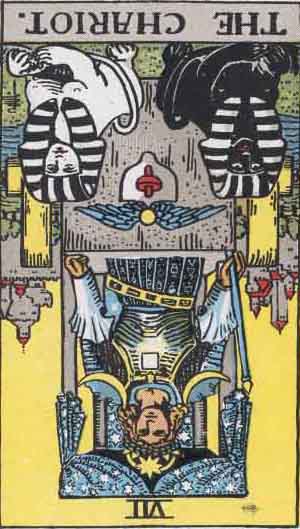 The Chariot card reversed in a reading can suggest inertia. Are you procrastinating on taking action? Or are you not sure what the next step is? Pinpoint the root of the blockage. Sometimes this obstacle comes from a force outside of ourselves. But typically, the Chariot hints at an internal dilemma.  The Chariot’s militaristic mindset suggests that the best course of action is to sit down and plan out a strategy. Work out the step-by-step, concrete actions needed to get moving again.

On a positive note, for now, holding back could be the best course of action. If you’ve been pushing hard, and in earnest, take a step back. Give the situation time to breath. This pause can give time for all the pieces to fall into place.

This card reversed in a reading can be a sign that you’ve gone down the wrong path. Are you feeling like the situation you’re in isn’t matching your values and goals? If that’s the case, course correct as soon as you can. This might be easier said than done. But the faster you can pivot back toward your goals, the quicker your progress will be.

In a similar vein, do not allow yourself to be dominated by other agendas. The Chariot card urges you to follow your path, but not at the expense of others. Don’t take advantage of others on your way to the top —and don’t let yourself be taken advantage of.

One of the most destructive aspects of the Chariot card is conceit and arrogance. The feeling of “divine guidance” can foster an illusion of superiority. Along with the Emperor (representing a king/government), the Hierophant (the clergy/status quo/organized religion), and the Chariot (the military/an enforcer/a conquer), these cards are a recipe for an Inquisition. Don’t fall into this trap. Don’t allow yourself to be an enforcer of oppression.

As mentioned earlier, the Chariot is associated with cars and transportation. When reversed, you could find yourself out of a ride! Get that maintenance you’ve been putting off. Be prepared for potential delays.

The Chariot reversed could indicate a stalling out of a relationship. This could stem from disinterest, passivity, or competing agendas. It can also suggest that a relationship has gotten a little routine and boring. Find ways to rekindle your romance. The Chariot favors activities that are exciting and challenging such as outdoor activities, playing sports or exercising together. You might think about a spontaneous weekend getaway!

A more positive aspect of the Chariot as a relationship card is the love of conquest. Remember how things were at the beginning of your relationship. Use thoughtful gestures and romantic dates as a way to revive a lull.

Workplaces represented by the Chariot reversed can suggest either of two extremes: unproductive passivity or nonstop grinding.

In the case of passivity, the workplace can be a hotbed of slackers and ineffective bosses. This can indicate a company culture that has no incentive for going the extra mile. At worse, the initiative might be punished and seen as threatening to your supervisors.

Conversely, this can represent a workplace where employees aim to win at all costs. When the Chariot is upright, this isn’t so bad if you’re prepared to hustle. But when reversed, the darker aspects of this could emerge as unfair deals, undermining, and sabotage.

The Chariot reversed can suggest a certain degree of nativity and submissiveness. If this is you in a reading, don’t let yourself be steamrolled or pushed into decisions. Get clear on what you need and negotiate a fair exchange. If something sounds too good to be true, it probably is.

It can also signal arrogance, conceit, and stubbornness. If this is you in a reading, understand that you must meet people where they are. Not everyone shares your values. Resist the urge to push others to agree with you.

I am unstoppable. I have the strength to move forward. 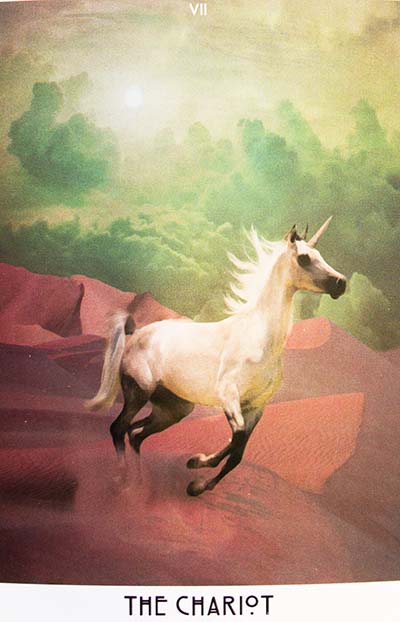 I love all of Danielle Noel’s decks. And unicorns are cool. ‘Nuff said!

But seriously, I love the creative imagery of a unicorn for the Chariot. This mythological beast feels right at home within the deck’s ethereal landscapes. This horse swift. It has a sharp horn to defend itself with if necessary. Unicorns are pretty and all, but don’t you imagine that thing would be a little intimidating pointed at you? All of these traits cleverly correspond with traditional aspects of the Chariot card. 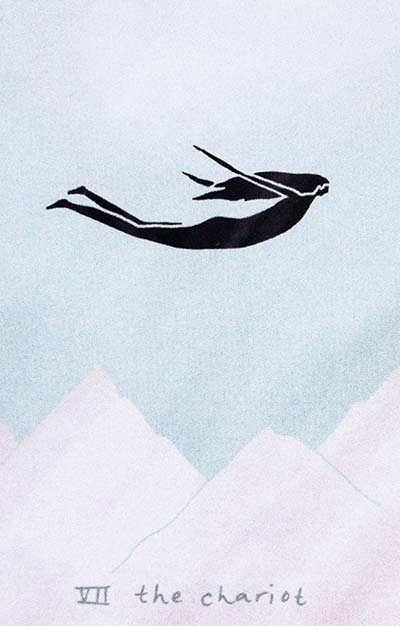 The Mesquite Tarot is one of my favorite depictions of the Chariot. I can remember my initial surprise seeing this card in my first look-through of the deck. The Chariot traditionally represents a moment in time between stillness and movement. Hence, it’s a card primarily about the will to move forward in the face of challenging obstacles.  But the Mesquite Tarot chooses to allow the figure smooth sailing on her journey. She flies above treacherous mountains with ease.  And why not? Do things always have to be so hard? I see this is a message that using our gifts can get us to our destination with the least resistance. 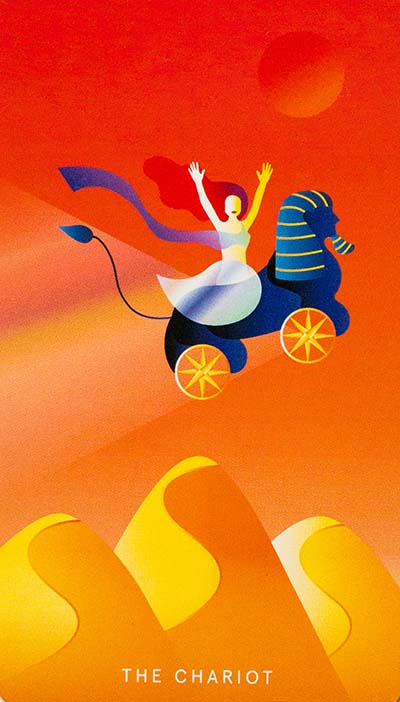 Mystic Mondays uses a similarly fun depiction of the Chariot. In addition to taking the path of least resistance, the journey might be fun too! What about embracing the talents that come naturally to you? What way of working feels like play to you? What makes you feel in flow? The thing that comes easily to you could be used for your competitive advantage. 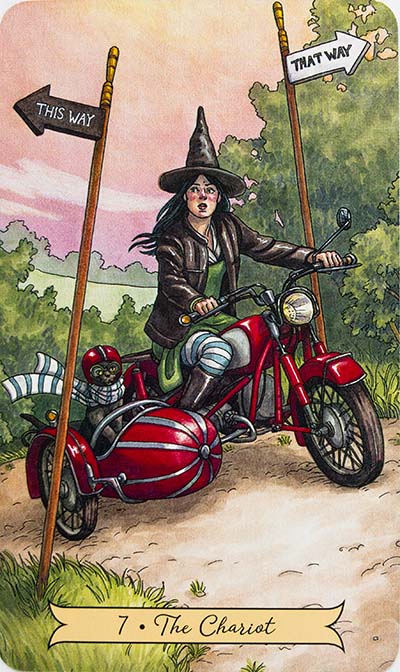 The Everyday Witch Tarot uses modern imagery for the Chariot card. One of the elements of this card is the potential to make a choice that sets you on a very different path. The beautiful illustrations by Elisabeth Alba capture the look of hesitation that we feel when faced with heavy, Chariot situations. The rider can’t stay there forever. A decision must be made. 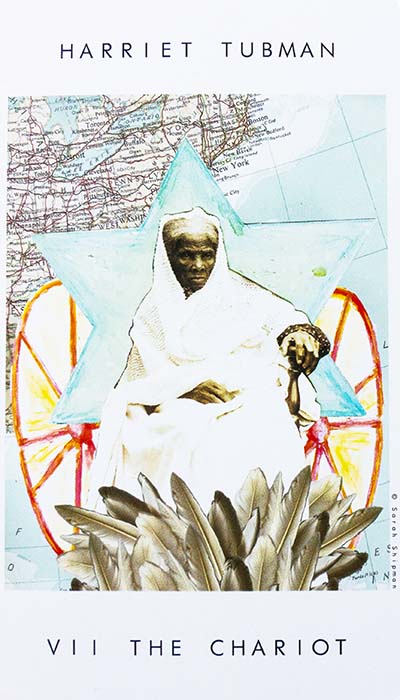 One of my favorite cards in the Our Tarot is the Chariot. It’s represented by Harriet Tubman, a former slave, women’s suffrage advocate, nurse, and guide for hundreds of slaves navigating the Underground Railroad. Her intelligence gathering played a huge role in crippling Confederate armies in the Carolinas. When she was a young girl, she suffered a head injury that causes seizures and, as she described them, visions from God (note the Chariot’s divine guidance aspect). Tubman represents the benevolence and powerful influence one person can have on others. She overcame unbelievable obstacles for her freedom, to help others, and become one of the most important women in United States history. 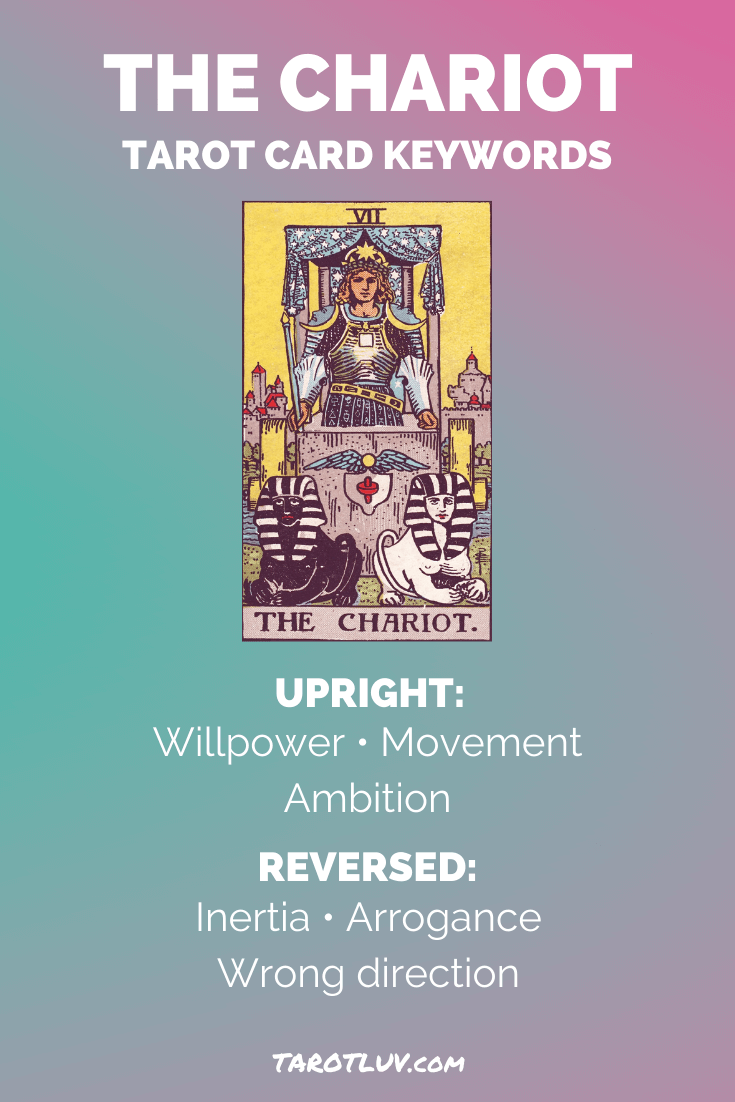